Matt Cullen Of Rock Ventures Answers: What’s Next For The QLINE, Riverfront & More! 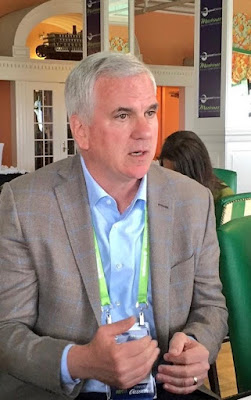 We sat down with Mr. Cullen, Principal of Rock Ventures at the 2017 Mackinac Policy Conference for a quick, candid Q&A:

PD: Of all the projects you've worked on, what's your favorite?

PD: You mentioned the Riverfront partly because it creates economic opportunity. How so? Can you elaborate on that?

MC: Sure. Creating that beautiful public space out of what used to be just a bunch of bombed out buildings and just a very negative image to the city, so at a micro level, if you will, it creates economic opportunity because there's been a billion dollars for the economic development that have followed the beginning of that already in the first 10 years, but it also just changes people's images of the city of Detroit, fundamentally. Because before you would see the image of the city and it was very unattractive. Now it's beautiful, on the cover of USA Today, and it's really getting showcased in a different way. It gives people a different sense of what's going on in the city. There's hundreds of units under construction right now, and I think thousands to come. That will be residential and retail and restaurants and so on. It creates value on a lot of different fronts.

PD: Out of curiosity, could you ever see it or has there ever been talk of where Gordie Howe Span would go? Is there a possibility that beautiful riverfront can extend beyond where it is now, either north or south?

MC : We're going west now. We started off with the East Riverfront, it was going to be from Joe Louis to the Belle Isle, and then we said, "You know what? We could go west and we could go from bridge to bridge." There are definitely opportunities.


PD: When it comes to the Riverfront specifically, what are some of the things that you're most excited about? There are a lot of things like the progress along the Uniroyal site. There's still a lot of growth opportunity there. Can you shed any light on that?


MC: You are right, it's just getting started. That's what's really cool about it. We've got this great public space, but as I mentioned at the very beginning, it becomes like the infrastructure to support a tremendous amount of development. At Rock, we have had conversations with General Motors about their parking lots. It's funny for me because it's full circle back to my GM days. We plotted out that site back then and now I'm back in the discussion, which is great. McCormack Baron is doing their residential construction right now.

Uniroyal is in play. I think the East Riverfront alone will have 5,000 residential units over the course of the next 20 years. Then the west, we're just really working on opening up. Mark Wallace and the team over there at the Riverfront Conversancy are doing an awesome job. We have some work to do relative to the design of the west and we need to get past the railroad property. Right now we get right up to the edge on both sides. We are working with them. We need ultimately to be able to get access across their property, and when we do, I think then we need to raise the money to build it out.

Then we tie into the new park, the Riverside Park on the other side of the Ambassador Bridge, and hopefully beyond. It's tremendously exciting. Before, there wasn't a place for people to came together, walk their dogs, push their baby carriages, walked hand in hand.


PD: Is there a grander vision for the QLINE?

MC: I think transit in general, we needed to get the RTA funded.  It was very unfortunate that it didn't happen. We need to get it done the next time. We always intended for the QLINE to be a catalyst for economic development, which it certainly has been. Seven billion dollars of development along the corridor since 2013 and we wanted it to be a catalyst for Regional Transit too. We want people to understand what modern transit looks like. Nobody in Detroit has been exposed to it really. At a federal level, while they call it the New Starts program, the joke is it's really Old Starts, because you need to have a system in order for them to really get engaged to provide you money for the next increment of it.

Anyway, long answer to your question, I think that it was always intended to be part of a broader framework. We think that there's a lot of opportunities to expand the streetcar kind of piece in the core downtown. The streetcar as far as the small connector kind of thing, we think should continue to expand. Then directly to your question, the streetcar/light rail should absolutely be extended along Woodward into the suburbs over time. Ideally, up to 59. That was the initial plan. So that's what we need. This is a small first step, but it's an important one.

PD: Can you from where you're sitting, since transit has so much to play in so many things, whether it's the Riverfront, it's all the things that you're doing. It's job attraction, right, because you're trying to get talent in. What do you think needs to happen for either 2018 or 2020 to push that RTA thing over the line?

I think engaging our political folks perhaps a little earlier in the process and making sure that they've been fully tied into it. I was supportive of the RTA. Obviously they had their own board and their own initiative and myself and Roger Penske got involved to be supportive, but I think that business leaders could also be more helpful by being engaged early and properly. It was too far into the process before we were reaching out to key stakeholders and getting them going, and I think we were trying to buttress the work that the RTA organization was doing. I think everybody's smarter now and they have a good sense of it. Based on what I've read and researched, it's pretty common for these things not to get approved the first time, so we're not too daunted by it. We're really hopeful we can get it done next time.